For my very first class of Citizen science: Biotechnology we had to blindly pick chits from a randomized pool of topics which would be our subject of research for this course. I picked synthetic biology, or rather it picked me!

After spending an entire day watching simplified Youtube videos and reading popular science articles on synthetic biology, I can finally claim to have gotten my head around the subject and some of the jargon necessary to understand and communicate it. I feel I am now equipped to take on more serious literature and scientific papers.

Any discussion around synthetic biology and/or genetic engineering seldom takes place without touching upon ethics and necessary regulations around the technology and of course “designer babies!”. I am more interested in speculating on parallel applications of this technology than to really have an opinion on it’s ethics and practical concerns. After all the motivation behind synthetic biology is ethically positive, at least in the realm of therapeutics and nourishment rather than enhancement! The reality is that there are certain urgencies which are far more grave than the unclear ecological implications and potential risks with this technology. It is tempting to attack these urgencies with a piece of tech that shows promise than to fully think through its implications. But is it even possible to fully think through its implications without implementing it? Who would have imagined the internet when the first transistor was engineered?!

I am also pondering over how this technology could reflect in design and in-turn in our day to day life of using products. If we circumvent all the sensational “hot topics” around this technology and imagine a regular day in future, maybe 70 years from now, where synthetic biology is mainstream and has already proven to be immensely successful in treating several diseases; A future where men never go bald and everyone on the planet has enough food, what would our mundane day-to-day life look like? If biotech creates a market for new materials then how would it impact manufacturing and advertising and how will these new methods affect the way our everyday products look and function. What would our toothbrush look like? or the humble bar of soap? what kind of underwear will we be wearing? how would we redesign kitchen tools to work with new forms of food? how will it alter some of our everyday rituals like skin care and hygiene or using contraception?

These may not be very glamorous topics to discuss but certainly very important. The mundane everyday life is the grand reality for most of us and is directly related to a person’s sense of well-being. I may explore more along this track through the semester.

I am interested in exploring BEAM robotics for my solar assignment for Energy class. BEAM, to me is fascinating in its biomimeticness and in its handicraft nature of free-form circuit sculpting. I am on a biomimetic / fake nature trip this entire semester. These themes are recurring in two other classes I am taking on soft robotics and micro biology exploration. I am eager to see how all of these could come together down the road.

So for this particular assignment I envisioned a BEAM based underwater robot. This is one category I found to be quite under explored in the BEAM circuit (:p). I looked through several BEAM maker forums but didn’t find any documentation. I decided to build my own based off a simple solar engine. The engine uses a capacitor to store charge from a PV panel and runs it through a voltage comparator and transistor to dump the charge into a single motor once the voltage from the PV rises to a particular potential.

This is the engine that makes the robot work. It takes in power from the PV panel on one end and a motor is attached to where the alligator clips are. I thought, once I get the motor to move, I can use it to actuate any kind of mechanism I design beyond that point. I was envisioning something to the effect of a deep sea organism. Very delicate, elegant and mystical!

Pictured above is FESTO’s smart inversion drive system, where a geometric floating object (inspired by origami toy) is filled with Helium and propels itself by inversion.
This, combined with a jellyfish was kind of the mental mood-board I had created.

With these references in mind I set out to ideate on the robot’s form, structure and mechanics. 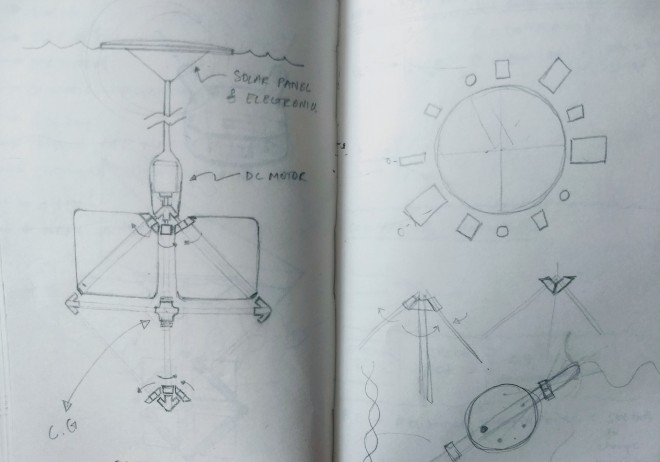 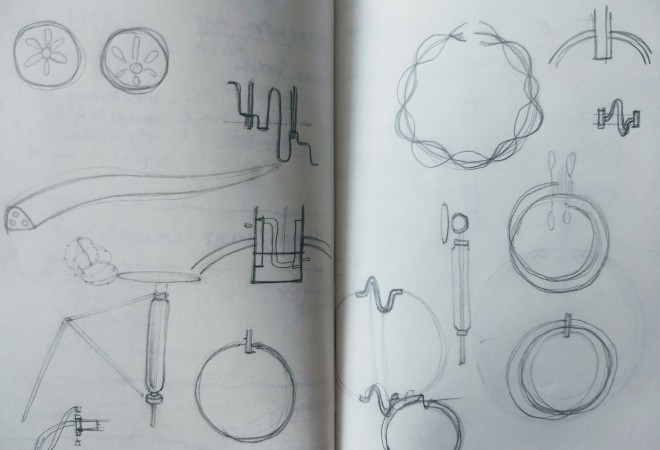 These are some of the early explorations. I eventually hit upon the idea of using a spring shaft as my main drive system. This is commonly found in the Dremel tool kit and as flexible extensions for power drills or screw drivers.

Everything else was found on the ITP junk shelf.

First thing I had to do was test the spring drive working principle. I cropped a segment of the spring off the gripper, taped it with a pin at the center and tried rotating it manually. It worked! and it was enough to create some conviction about the idea. I just had to figure out how to drive it with a motor.

Next step was to extend the motor’s axle. I wanted a dual shaft so I could attach both ends of the spring drive to the same axle. In this case I had to reprint a spur gear from the motors gear box for it to hold the new extended axle.

I remodeled the gear in CAD and got it printed.

I made the necessary modification to the CAD file (pictured above). I also designed a basic casing for the motor and the solar engine and put it for 3D printing. In the meantime I started working on making a jig to glue the linkages to the spring drive. The linkages were to be glued at 90 degree angles alternately.

Parallely, I started working on sculpting the solar engine. This is the best part of the process for me. Free form sculpting of electrical components is an art. You have to carefully plan out the entire architecture and carefully bend and route the wires for soldering. Doing all this with just two hands makes it more challenging.

It was time to put it all together. After 4 sticks of hot glue it finally came to life.

I could manage to record it just before the motor axle slipped on the 3D printed gear. For this reason I dint continue with attaching the flaps. This is also pretty far away from actually being water ready. I plan to keep refining this idea as and when I get time. The idea for this kind of radial drive is proven mechanically. Now its a matter of making it waterproof and perhaps scaling it up in power to see if it actually propels itself underwater!

Chris Woebken held a Bio-Design workshop in class. It was a speculative design exercise aiming to visualize bio futures through tangible media. The idea was to gather simple products or materials from a dollar shop and re-purpose them to create and communicate new meaning and ideas. Everyone brought in at least 10 items each.

Full spread of random dollar store items brought in by the classmates. Chris brought along some vacuum formed package shells and different stickers. There were also some random magazine cut outs of a range of news articles.

We were to imagine a hypothetical topic related to our research paper. My selected topic is Gut-microbiome and its effect on the brain.

So I imagined a future scenario where our world is getting increasingly sterile. We live in air quality controlled clean rooms. So are our offices and cars and movie theaters, everything is perfectly clean. Fruits and vegetables do not grow in soil anymore. Most of our food is grown in labs from cell cultures. There is very little of real, organic matter around. And the lack of helpful bacteria has drained our vitality and spirit.
We survive on constant entertainment and media consumption rather than engaging with the real world and seeking pleasure and fulfillment. Celebrity worship is rampant in a society like this which feeds on entertainment media.

In order to prolong their celebrity stature and physical and mental vitality, only celebrities have access to bio-engineered, probiotics and healthy bacteria. this has given rise to microbial piracy! Microbiome pirates are paparazzi of the future world, who are not only on the lookout for candid  photographs of famous celebrities but also their gut bacteria! This celebrity gut bacteria is sold on the underground market like drugs.

This is quick prototype to sketch out this future scenario by imagining a product, in this case, Jenn Aniston’s gut bacteria sold in form of balls and labeled as artisanal mood enhancer! $66

This is the device used to extract the microbiome!